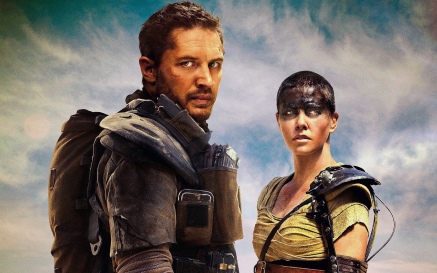 In 1985 the last installment in the Mad Max trilogy, Thunderdome, was released. But, though 30 years later, George Miller is sitting again in the director’s chair for the sequel, Mel Gibson is not. Taking his place as the face of the franchise is Tom Hardy. Sadly, Mad Max: Fury Road seems to be following the steps of last year’s Edge of Tomorrow. A great action movie that everyone loves, has huge word of mouth but for some reason, no-one goes to the cinema to watch. This and given how much the movie cost to make, makes very unlikely that the studio will greenlight a sequel, at least with the same budget.

In an apocalyptic future where all the landscape has become desert and water and gasoline are precious elements, the prisoner Max (Tom Hardy) finds himself tied to the front of a car as the “blood-bag” of Nux (Nicholas Hoult) when Immortan Joe (Hugh Keays-Byrne) discovers that Imperator Furiosa (Charlize Theron) has gone rogue and has stolen something very dear to him and is planning to cross the harsh wasteland to return to her homeland. 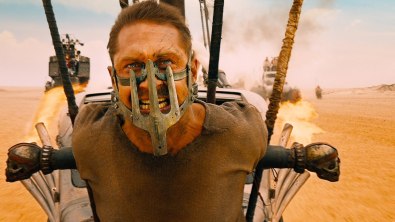 I am one of those weird people who never saw the Mad Max trilogy so I can’t say if this movie is better or how much justice does Tom Hardy do to the character that made Mel Gibson a star in 1979. I can only say, he was great. He doesn’t have much dialogue but he manages to portray a lot just through body language. And if it is funny to see Tom Hardy wearing again a mask and talking weird like in his iconic role as Bane in The Dark Knight Rises, as his companion Nux, we have Nicholas Hoult hiding once more behind a lot of make-up just as he did in the X-Men movies as Beast and in Warm Bodies.

As for the film and given the trailers, I was expecting a non-stop action movie and that is partly what Mad Max is, but I was delightfully surprise that it is also an homage to the power and independence of women. This is mainly because even though Max is the title character, and Tom Hardy is fantastic, this is really Furiosa’s movie and Charlize Theron, with the guide of George Miller, has given us one of the best action heroes in years. Furiosa’s ferocity and determination never overshadows her tenderness and it is great not only seeing women fighting together but also fighting for each other. The five wives could have easily been mere damsels in distress but each one played an active role in trying to regain their freedom, with fierceness and yes, also a lot of glamour.

But the true star of Mad Max: Fury Road is actually behind the camera. George Miller, at 70 and after so many delays in the production of the film, has made a spectacle using mostly practical effects. The design of the world and the characters is so grotesque that it becomes in some twisted way quite beautiful.

Really, the best word to describe Mad Max is insane. The characters are crazy, the action is crazy, even the story in itself. The action is chaotic but unlike many other action movies (I’m looking at you, Michael Bay), you can always tell what is going on. This is a great advantage since the movie is basically a big relentless action sequence and therefore, doesn’t have too much character development or even plot. There is some narrative here and there when the action stops that comes across a bit cheap and feels too much like exposition. However, and even though other things could have had  more explanation, in the end Mad Max doesn’t really need any of that to be an exhilarating film.

Title: A Million Ways To Die In The West

Summary: After Albert backs out of a gunfight, his fickle girlfriend leaves him for another man. When a mysterious and beautiful woman rides into town, she helps him find his courage and they begin to fall in love. But when her husband, a notorious outlaw, arrives seeking revenge, the farmer must put his newfound courage to the test.

Seth MacFarlane, director of the successful Ted, directs, produces, co-writes and plays the main role in this suppose comedy that I don’t even know how to describe. Repetitive with all the reasons why living in the west sucks, A Million Ways to Die in the West treats the audience as dummies who wouldn’t understand the point of the movie by the title. It’s a complete mess, impossible to take seriously and fails to engage.

Seth MacFarlane feels so out-of-place. I guess part of the purpose of the movie is precisely to show that his character, Albert, doesn’t belong there, but it’s just distracting. He gave himself the most loving and naive character that you’re supposed to feel sorry and care for him but it doesn’t work and the fact that he spends the better part of the movie throwing stupid and immature jokes doesn’t help at all.

On the other hand, I liked Charlize Theron as Anna a lot. She looked good, the character was interesting and had good personality and she helps to bring more shades to Albert which is quite necessary, but the romance doesn’t work. It was actually much more interesting the relation between her and Liam Neeson but the seriousness of it felt so forced into the overall silly story. The character of Liam Neeson potentially could have been great in another movie but here he was just a throw away and very one-note. And I don’t like seeing Liam Neeson being brought to that level.

Neil Patrick Harris and Amanda Seyfried are ok with what they are given to do, but the most fun to watch were Sarah Silverman and Giovanni Ribisi, who I would have prefer to watch a movie just about them and their weird and hilarious relationship.

I wanted so much more from Seth MacFarlane, who I loved presenting the Oscars, but A Million Ways to Die in the West feels so long and repetitive. The visuals and the music are good but the comedy is so forced and immature it’s not funny. If you have seen the trailer you have seen everything the movie has to offer.